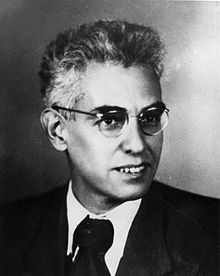 Alexander Luria was born in Kazan, an old Russian University town east of Moscow. He entered Kazan University at the age of 16 and obtained his degree in 1921 at the age of 19. While still a student, he established the Kazan Psychoanalytic Association, and planned on a career in psychology. His earliest research sought to establish objective methods for assessing Freudian ideas about abnormalities of thought and the effects of fatigue on mental processes.

In 1923 his use of reaction time measures to study thought processes in the context of work settings won him a position at the Institute of Psychology in Moscow where he developed a psychodiagnostic procedure he referred to as the “combined motor method” for diagnosing individual subjects’ thought processes. In this method (described in detail in Luria, 1932), subjects are asked to carry out three tasks simultaneously. One hand is to be held steady while the other is used to press a key or squeeze a rubber bulb in response to verbal stimuli presented by the experimenter, to which the subject is asked to respond verbally with the first word to come to mind. Preliminary trials are presented until a steady baseline of coordination is established. At this point, “critical” stimuli which the experimenter believes to be related to specific thoughts in the subject are presented. Evidence for the ability to “read the subject’s mind” is the selective disruption of the previously established coordinated system by the critical test stimuli. This method was applied to a variety of naturally occurring and experimentally induced cases, providing a model system for psychodiagnosis that won widespread attention in the west when it was published.The book describing these studies was published in Russian only in 2002, owing to its association with psychoanalytic theorizing which was disapproved of by Soviet authorities.

In 1924 Luria met Lev Semionovich Vygotsky, whose influence was decisive in shaping his future career. Together with Vygotsky and Alexei Nikolaivitch Leontiev, Luria sought to establish an approach to psychology that would enable them to “discover the way natural processes such as physical maturation and sensory mechanisms become intertwined with culturally determined processes to produce the psychological functions of adults” (Luria, 1979, p. 43). Vygotsky and his colleagues referred to this new approach variably as “cultural,” “historical,” and “instrumental” psychology. These three labels all index the centrality of cultural mediation in the constitution of specifically human psychological processes, and the role of the social environment in structuring the processes by which children appropriate the cultural tools of their society in the process of ontogeny. An especially heavy emphasis was placed on the role of language, the “tool of tools” in this process: the acquisition of language was seen as the pivotal moment when phylogeny and cultural history are merged to form specifically human forms of thought, feeling, and action.

From the late 1920’s until his death, Luria sought to elaborate this synthetic, cultural-historical psychology in different content areas of psychology. In the early 1930’s he led two expeditions to Central Asia where he investigated changes in perception, problem solving, and memory associated with historical changes in economic activity and schooling. During this same period he carried out studies of identical and fraternal twins raised in a large residential school to reveal the dynamic relations between phylogenetic and cultural-historical factors in the development of language and thought.

In the late 1930’s, largely to remove himself from public view owing to the period of purges initiated by Stalin, Luria entered medical school where he specialized in the study of aphasia, retaining his focus on the relation between language and thought in a politically neutral arena. The onset of World War 2 made his specialized knowledge of crucial importance to the Soviet war effort, and the tragic widespread availability of people with various forms of traumatic brain injury provided him with voluminous materials for developing his theories of brain function and methods for the remediation of focal brain lesions. It was during this period that he developed the systematic approach to brain and cognition which has come to be known as the discipline of neuropsychology. Central to his approach was the belief that “to understand the brain foundations for psychological activity, one must be prepared to study both the brain and the system of activity” (1979, p. 173). This insistence on linking brain structure and function to the proximal, culturally organized, environment provides the thread of continuity between the early and later parts of Luria’s career.

Following the war Luria sought to continue his work in neuropsychology. His plans were interrupted for several years when he was removed from the Institute of Neurosurgery during a period of particularly virulent anti-semitic repression. During this time he pursued his scientific interests through a series of studies of the development of language and thought in mentally retarded children.

In the late 1950’s Luria was permitted to return to the study of neuropsychology, which he pursued until his death of heart failure in 1977. In the years just prior to his death, he returned to earliest dreams of constructing a unified psychology. He published two case studies, one of a man with an exceptional and idiocyncratic memory (Luria, 1968), the other of a man who suffered a traumatic brain injury (Luria, 1972). These two case studies illustrate his blend of classical, experimental approaches with clinical and remediational approach, a synthesis that stands as a model for late 20th Century cognitive science.

Back to People Directory
Back to Soviet-Russian Psychology